Antibody research is a crucial first step for antibody and immune-oncology drug development. This discovery research process includes steps from target assessment to lead optimization and applies a variety of molecular engineering and synthetic biology methods. Ultimately, lead candidates are selected based on a desired set of biological activities, including functionality, binding selectivity, affinity, and stability, which help to enable further antibody development studies. 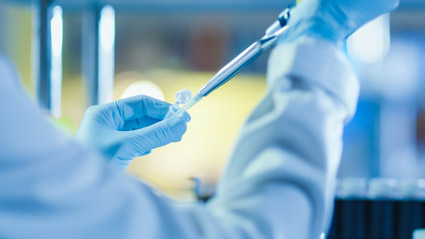 What is antibody discovery?

Antibody discovery involves the application of structural computation and library generation to screen properties of antibody and antibody-like molecules for downstream research approaches.

The early discovery phase focuses on antibody binding properties or antibody “hits” and occurs before a pre-clinical or clinical phase. During the discovery phase, antibody researchers will tailor affinity and stability to yield better results for a potential therapeutic candidate.

Target assessment involves both target identification and target validation. Targets are genes or proteins that have some function in a particular disease or pathway. Identifying and characterizing a “druggable” target for a therapeutic antibody is the first step in understanding how to treat the disease of interest.

The target identification step usually casts a wide net and can include bioinformatics approaches to find mutations associated with diseases, as well as other methods such as RNA-Seq or proteomics to compare expression profiles, in vitro phenotypic or pathway analysis, or the generation of large gene knockout libraries. Once possible targets are identified and the possibilities are narrowed down, the target is confirmed using a second, more specific approach such as functional screening with knockdown (RNAi), or knockout (CRISPR) libraries.

This stage begins by confirming an interaction between an antibody and the target (i.e., antibody-antigen interactions), often by injecting an antigen of interest into a host animal to generate an immune response. Classically, this is done in humanized mice to generate monoclonal antibodies but can also be in other animals such as llamas, which generate single-domain nanobodies that are easier to produce and can penetrate hard-to-access targets. In vitro selection techniques, such as phage display and yeast display, are also common. In these approaches, the antigen protein is fused to a surface protein on the phage or yeast and vast numbers of potential antibodies are screened to find “hits” which, in this instance, are antibodies that can bind to the antigen protein.

Hundreds of hits may be generated through this process and subsequently are profiled. At the profiling stage, researchers rely on virtual screening, assay development, and high-throughput screening approaches to identify which hits have high titers and promising properties like a high binding affinity, selectivity, and lack of toxicity.

Once lead antibody molecules are selected through a series of screening processes and have met the pre-established criteria, further alterations allow for improved efficacy and safety. One type of optimization can be done through altering the sequences of the antigen-binding regions of the antibody in order to enhance certain properties, such as binding selectivity and affinity.

In this process, variable light and heavy chain regions are analyzed, often by next generation sequencing. Researchers can then create variants via mutagenesis or by using synthetic dsDNA through an iterative process to further screen and select which molecule to move forward in the workflow. These leads are used in in vivo studies to better understand the dynamic interactions with the biological system of interest. This then results in a therapeutic antibody candidate and ends the discovery phase of the drug development process.

How can synthetic biology be used in drug discovery?

Genes and gene fragments can be used throughout this antibody discovery process.

Gene Fragments can be used to synthesize sections (i.e., Fc portion or variable regions of antibodies), or site-directed mutagenesis libraries can be created. For researchers that prefer to skip cloning in-house, complete genes can be ordered here.

Several factors contribute to gene expression in heterologous systems, including codon preferential usage. IDT offers a codon optimization tool to convert DNA or protein sequences from one organism for expression in another.

Screening antibody leads in a high-throughput manner saves time and resources, driving your research forward by helping you to find the ideal antibody candidate for downstream applications.

eBlocks Gene Fragments are dsDNA Fragments of 300–1500 bp in length. They are uniquely suited for high-throughput screening (HTS) of multiple constructs, especially for antibody discovery workflows.

gBlocks and gBlocks HiFi Gene Fragments are dsDNA fragments of 125⁠–⁠3000 bp in length. They are designed for affordable and easy gene construction or modification, qPCR/NGS controls, and more.

Genes and MiniGenes™ are NGS-sequence verified, circular double-stranded DNA in a plasmid. DNA sequences 25 bp to 5 kb, or longer, are provided with IDT’s in-house cloning vectors or your own custom vector, without additional cloning fees.

Oligo pools are individually synthesized single-stranded DNA sequences that range from 40 to 350 bases. Each pool can be designed with up to 20,000 oligos in a single tube.

*RUO—For research use only. Not for use in diagnostic procedures. Unless otherwise agreed to in writing, IDT does not intend for these products to be used in clinical applications and does not warrant their fitness or suitability for any clinical diagnostic use. Purchaser is solely responsible for all decisions regarding the use of these products and any associated regulatory or legal obligations.