SynBio students get global exposure, and a chance to change lives

SynBio students from around the world converged in Boston in November for iGEM 2019. Teams revealed innovative projects, many of which used IDT products. A few examples are summarized.

A new treatment for chronic kidney disease. A modular antimicrobial bandage for burn victims. Field tuberculosis kits for refugees. These are just a handful of the projects that took home top honors at the annual iGEM Giant Jamboree in Boston (November 2019).

Innovative scientific proposals and solutions executed over the past year by teams around the world were judged. Some 6000 participants representing 340 teams from 40 countries spent a long weekend showcasing their big ideas and new perspectives on biological technologies. IDT, of course, was there.

iGEM is an independent, non-profit organization which aims to pioneer and advance the field of synthetic biology. Their Giant Jamboree event started as an intersession course at MIT in 2003. IDT, a platinum partner for the event over the past 6 years, offers a lounge (Figure 1), where competitors can relax, recharge, snack, mingle, and get in a round of giant Jenga and Connect4. 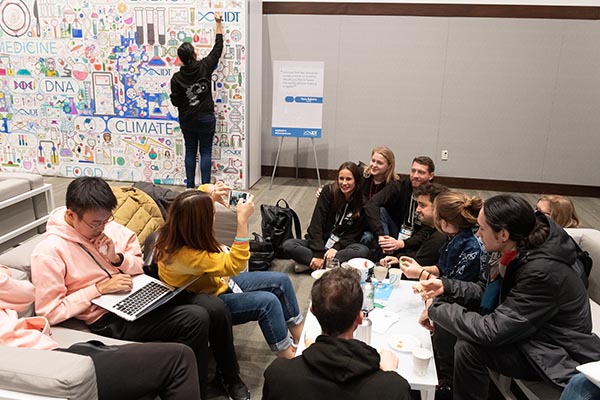 IDT president Trey Martin, in an address to participants at the start of the event, talked about IDT, his role at the company, and IDT’s rise from a CRO in the cornfields of Iowa into the largest custom oligo company in the world—one supplying thousands of researchers globally with the raw materials to turn their scientific ideas into reality.

Martin also announced that IDT would offer all iGEM 2020 teams 20 kb of free, custom DNA or Alt-R CRISPR genome editing products. In addition, teams will receive technical support from IDT experts. At the Boston event, IDT offered more than just DNA-centric products and a spot to chill. Company associates participated in a panel discussion where they talked about their individual professional journeys and how pursuing a career in the life sciences has been a good choice.

IDT filled hundreds of orders for the high school, undergraduate, and “overgraduate” (to qualify, one or more team members had to be at least 23 years old as of March 31, 2019) teams that participated in iGEM 2019, supplying everything from Alt-R CRISPR crRNAs to gBlocks Gene Fragments, and 25 nmol DNA oligos. By the time the doors opened in Boston, IDT had shipped products to teams on 6 continents.

Here are profiles for some of the winners:

National Cheng Kung University (NCKU) of Taiwan brought home the undergraduate team Grand Prize for their solution tackling chronic kidney diseases through early diagnosis, which will lead to timely treatment. The team also won awards for Best Therapeutics, Best Hardware, Best Measurement, Best Model, and Best Presentation. Chronic kidney disease is a big deal in Taiwan, as the team notes: the estimated prevalence is just under 12%, which calculates to 2.8 million patients and a cost to the government of $1.6 billion in 2016. (Pssst—be sure to visit their iGEM team page. It’s hilarious!)

The overgraduate team from Linköping, Sweden, brought home the Best Diagnostics award for their engineered E. coli and V. natriegens, which produced antimicrobial peptides and enzymes linked to a carbohydrate binding domain. These molecules were purified and used to fight infections through attachment to a cellulose bandage. As the team described, when the bandage makes contact with thrombin in the blood, the antimicrobes are activated.

Linköping made use of IDT 1251–1500 bp gBlocks Gene Fragments and 25 nmol DNA oligos to execute their experiments.

The Best Diagnostics Project award for undergraduates went to the team from Greece’s Thessaly University. Team Thessaly was inspired to solve a problem occurring in their own backyard—refugees and migrants with tuberculosis (TB). Those groups, the students noted, have compromised access to healthcare, and TB is a killer, especially when patients do not receive care with the right diagnostic tools. Thessaly’s ODYSSEE is a modular platform for field diagnosis of TB, which can be used worldwide.

Leiden University brought home the Best Manufacturing award for overgraduates with its effort to fight burn wounds. Burn wounds, the team remarked, are a leading cause of morbidity and can result in life-long disfigurement. Current treatments are insufficient, so the team used the biomaterial suckerin to create a hydrogel dressing paired with a cleavable linker system to couple the antimicrobial peptides and wound-healing agents.

Jeff Schmerker is a marketing communications writer for IDT

Gene fragments from 200 to 3000 bp shipped plated, or in suspension and ready for use.