The Eliminate Dengue Program is a multinational research organization dedicated to reducing the spread of mosquito-transmitted diseases. Learn about how IDT is supporting their work, which has recently made breakthroughs for dengue and Zika virus mitigation.

Aedes aegypti (A. aegypti), otherwise known as the “yellow fever mosquito”, is widely recognized as a primary vector for the transmission of viruses throughout human populations [1]. The most common viruses carried by A. aegypti include dengue (DENV), Zika (ZIKV), chikungunya (CHIKV), and yellow fever (YFV). In recent years, prevalence of these viruses and their associated disease states has risen dramatically. This has resulted in a large (and growing) public health concern, as well as increased demands for effective mitigation strategies.

The Eliminate Dengue Program, led by Professor Scott O’Neill, began in Australia in 2005 as a response to the growing number of DENV-affected communities around the world. In 2008, the Program broke new ground. Using precise microinjection, scientists successfully infected A. aegypti embryos with Wolbachia bacterium. Their achievement, which required years of trial and error in the lab, was just the starting point for Dr Luciano Moreira. An expert in entomology, molecular biology, and infectious disease, Dr Moreira joined Prof O’Neill and the Eliminate Dengue Program in Australia shortly after their breakthrough with Wolbachia.

When Dr Moreira joined the Eliminate Dengue Program in 2008, the Program’s objective was to reduce the lifespan of A. aegypti mosquitoes in the wild. The scientists hypothesized that through Wolbachia infection, they could compromise the mosquito’s reproductive fitness and lower its numbers over time, thus hindering A. aegypti's ability to spread DENV and other viruses across human populations. But shortly after arriving in Australia, Moreira and O’Neill made a discovery that would change the Program’s approach entirely. Moreira explains, “We were particularly interested in how the Wolbachia bacterium would interact with the dengue virus when the two occupied the same mosquito. When we infected Wolbachia-carrying mosquitoes with dengue, the bacteria actually blocked the virus from replicating within the mosquito. It was very exciting.”

Moreira and O’Neill’s finding led to a major shift in the Eliminate Dengue Program’s overall strategy. Instead of trying to reduce the lifespan of A. aegypti, they began examining how the pathogen interference properties of Wolbachia could be used to control DENV transmission.

How the Wolbachia method works

When introduced into the cells of A. aegypti, Wolbachia prevent DENV from replicating and subsequently being transmitted to people. The bacteria also naturally manipulate their host’s reproduction through a process called cytoplasmic incompatibility. This allows the bacteria to persist and eventually thrive in wild populations independently, which is crucial to the success of the Program.

Dr Moreira notes, “One of the most important features of our project is how sustainable it is. When we release Wolbachia-infected mosquitoes into an area, they increase their prevalence without us having to release more mosquitoes [at that site].” This saves the group valuable time and effort, and contributes greatly to the longevity of the project.

Watch this YouTube video for an explanation of the Wolbachia method, and see how the Eliminate Dengue Program is using it in dengue-affected communities.

In 2012, Eliminate Dengue expanded to Brazil, where Dr Moreira became project leader. Here, what started as a dengue-mitigation project has evolved into one that encompasses additional viruses such as ZIKV and CHIKV. Below is an overview of their work and recent discoveries.

After gaining government approval and support from local Brazilian communities, Dr Moreira and his team first released Wolbachia-infected mosquitoes into the wild in September 2014. The pre-determined location was a community called Tubiacanga in Rio de Janeiro, where mosquitoes were released weekly, for 23 weeks. Since then, Dr Moreira’s lab has been monitoring the local A. aegypti population, collecting weekly mosquito samples from the field and screening them in the laboratory.

The team has processed over 780 plates (nearly 66,000 unique samples) since the Tubiacanga release. To monitor the A. aegypti population, they have developed 2 robust RT-qPCR assays for screening individual mosquitoes. In one assay, they screen for the Wolbachia bacterium—specifically the wMel strain—as well as A. aegypti to ensure they have collected the correct mosquito species. This wMel/A. aegypti duplex assay is used for every mosquito collected fromthe field.

In a separate project, the scientists use a DENV/ZIKV/CHIKV RT-qPCR assay to test the mosquito’s vectorial competence. This triplex assay detects and quantifies viral RNA levels of DENV, ZIKV, and CHIKV, and is used to confirm Wolbachia’s continuous pathogen-blocking effects in A. aegypti. In both RT-qPCR assays, Dr Moreira’s group uses sensitive ZEN Double-Quenched Probes for bacterial and viral RNA quantification. On his decision to incorporate the ZEN Probes into their assays, he notes, “These probes have been very helpful in terms of our assay sensitivity and overall performance. Our assay protocols are much better now compared to the past.”

In May 2016, Dr Moreira and colleagues published new findings which suggest that, similar to DENV, Wolbachia infection in A. aegypti can effectively mitigate ZIKV transmission [3]. First, they fed ZIKV to Wolbachia-infected and Wolbachia-uninfected mosquitoes, and measured the resulting ZIKV RNA levels in the abdomens, heads, and saliva of the 2 groups. They found that Wolbachia infection reduced both the prevalence and intensity of ZIKV in A. aegypti, at 7 and 14 days-post-infection (dpi). 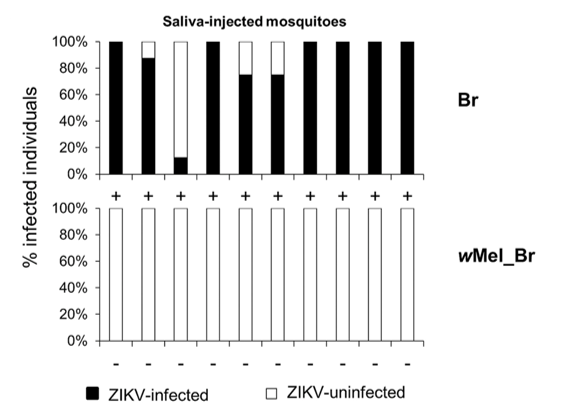 Figure 2. Wolbachia infection restricts ZIKV transmission in A. aegypti mosquitoes [3]. ZIKV-infected saliva samples from Wolbachia‑absent (Br) and Wolbachia-carrying (wMel_Br) mosquitoes were injected into ZIKV-uninfected mosquitoes. All groups that received saliva from Br mosquitoes had some prevalence of ZIKV infection (+), while no subsequent ZIKV infections (–) were seen in groups that received saliva from wMel_Br mosquitoes. ZIKV identification and quantification was done via RT-qPCR. Each column represents a group of mosquitoes (n = 20) injected with a single saliva sample. Image courtesy of Cell Host & Microbe, under the Creative Commons Attribution License (CC BY).

Public concern over ZIKV has heightened in 2016, largely due to the Rio Olympics and the potential for the virus to spread into North America and other parts of the world. For more information on Zika virus and a summary of recent developments, read the DECODED Online newsletter article, Zika virus: Advances in disease modeling and detection.

Progress and future directions for the Eliminate Dengue Program

Since Moreira and O’Neill discovered Wolbachia’s ability to mitigate DENV transmission in 2008, the Eliminate Dengue Program has grown into a multinational scientific collaboration. Those involved have authored numerous publications on Wolbachia’s utility in the field of mosquito-transmitted diseases, and the program is now conducting field trials in dengue-affected communities across Australia, Brazil, Colombia, Vietnam, and Indonesia.

Due to the Program’s previous accomplishments and promising outlook, the Eliminate Dengue Program expects to expand. Dr Moreira and Prof O’Neill anticipate new release sites across more locations, as well as future collaborations with global public health organizations. They believe that through these partnerships, the Eliminate Dengue Program can obtain the extensive epidemiological data needed to solidify Wolbachia’s utility in dengue- and Zika-affected communities.

To learn more about the Eliminate Dengue Program, their research, and their accomplishments, visit www.eliminatedengue.com/program.

The Wolbachia bacterium is present in an estimated 60% of all insects, though it is not naturally found in Aedes aegypti [2]. When spreading throughout a mosquito population, Wolbachia poses no risk to humans, as these bacteria are too large to pass through salivary glands of a mosquito. Additionally, the bacteria have a minimal effect on the fitness of an A. aegypti individual. This is an important attribute, because a strain that severely reduces a mosquito’s fitness would be unable to permeate the population. 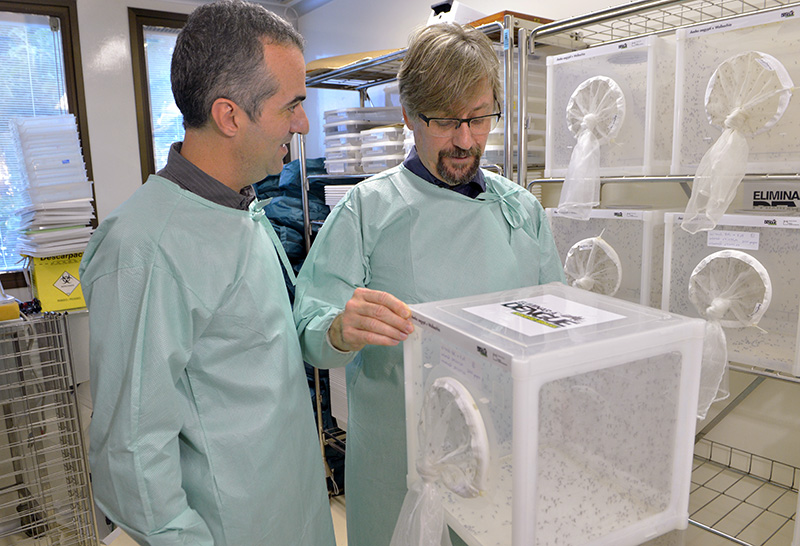 Dr Luciano A Moreira (left) joined the Oswaldo Cruz Foundation – FIOCRUZ in 2002 after 4 years of research at Case Western Reserve University. In 2008, Dr Moreira joined the Eliminate Dengue Program and worked closely with Professor Scott O’Neill (right) for 2 years at the University of Queensland. With the discovery of the Wolbachia method, the Eliminate Dengue Program expanded to Brazil, and Moreira returned to his home country as the project leader. In his years of research, Moreira has authored more than 50 publications and has become an expert in the field of molecular biology and insect-borne diseases.